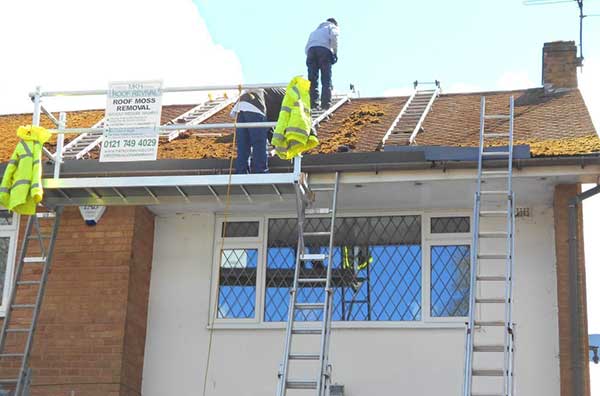 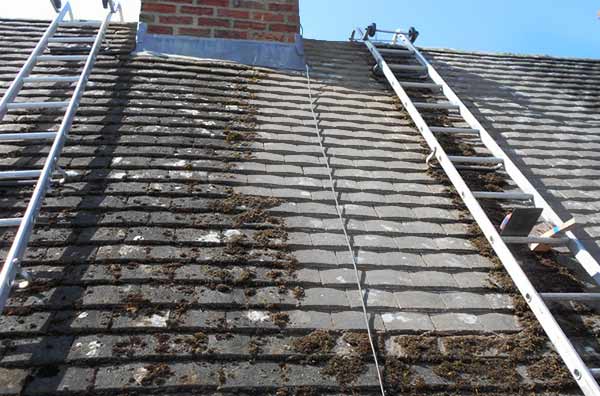 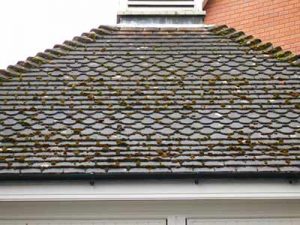 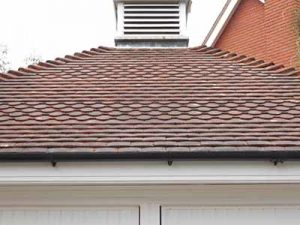 We use a specialist biocide and manual removal techniques to remove moss. 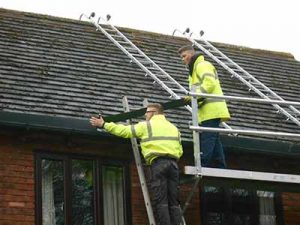 Roof Moss can collect in gutters and block down pipes. 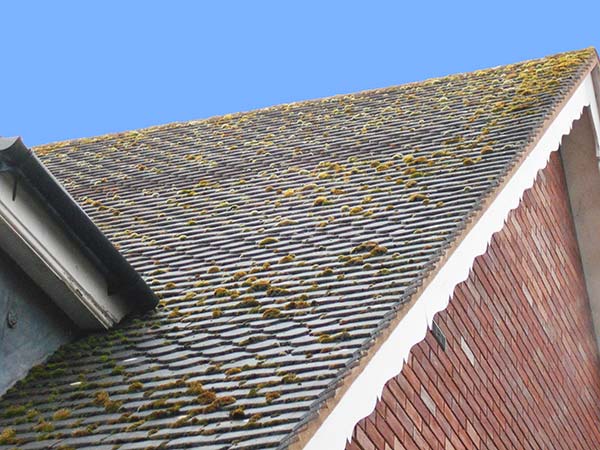 Roof moss is due mainly as a result of our mild and temperate climate.  Moss is found mostly on fire treated clay and concrete tiled roofs that are north facing.

It will be more cost effective to revive an existing roof that is covered in moss than to replace it, but choosing the correct way to do this is vital to the longevity of the roof.

There are many ways to approach the removal of moss from a roof, some practical and some totally impractical, these will be explained in greater detail later.

If moss is not treated or removed it will continue to grow and eventually encroach underneath the tiles which will lift the tile from its lying position and allow water to ingress the underside of a roof.

Is Moss Build-Up A Problem?

Moss that builds up on a roof will eventually fall or be blown into valleys, guttering and downpipes this will ultimately create additional problems to a property.

A roof is at its most vulnerable when moss is present especially when the moss clumps are frozen, as this has a concentrated frozen effect upon the tiles making them very brittle. Mortar too can suffer as a result of frozen moss. When moss is wet it can weigh three times its original weight, putting added stress on its timbers.

Our experience has been gained from working on roofs for over twenty years. During this time we have seen the result of moss being left untreated and also the pitfalls of having the moss removed incorrectly. We have researched the safest and most affordable method to remove moss and treat its effects.

Find out more about us and how we work here > 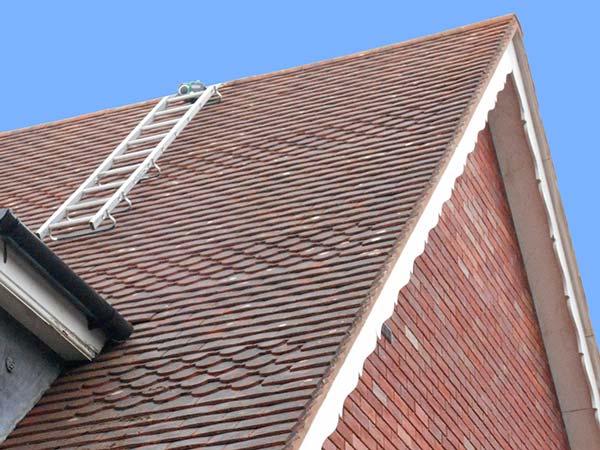 Never Clean Your Roof With A Pressure Washer

One of the quickest ways to remove moss is by using a pressure washer you should never allow your roof to be cleaned using this method Though quick, this a very aggressive way to clean a roof as it removes the colour and the original seal of the tile.

Most roof cleaning companies that use this method will also want to apply a roof coat (paint)  this is very expensive and the NFRC (National Federation Of Roofing Contractors) do not endorse its use.  They also strongly discourage the use of pressure washing to clean roofs because of the damage that it causes.

Don’t be caught out by fly-by-night roof cleaners that claim they can pressure wash without damage!

On the day, 4 lads came including Mark himself and they were professional, polite and hard working. It helped that it was a dry and (unfortunately) a sunny day so I just ensured they stayed hydrated. Mark took some before and after pictures, front and back of the house, the comparison was shocking.

Payment was easy and only accepted on the day, not like one cowboy who expected payment on a different job upfront even though it was a monthly service job.

There was no hard sale just good quality advice from Mark which is always appreciated. On the day, as well as doing the expected work on the roof, they cleared the gutters, swept away any mess and gave me no trouble at all.

It was pleasant to have such a passionate team work together happily and put customer satisfaction first.

From initial contact to the finished article, Mark and his team from MKH were total professionals. He gave a face to face personalised no obligation and competitive quote, then followed this up with emails to negotiate a suitable date to fit around us and the weather!

There was a friendly team of four who were all polite, friendly and worked non-stop. Mark kept us in the loop explaining what they were doing at each stage and even took photographs of the various stages to show us the progress and fabulous finish.

Mark & the team were great. From the initial contact, quote and the actual work carried I was very pleased with the outcome. They left no mess, even took down some old Satellite dishes and carried out some minor roof repairs – all part of the service.

All the lads were very polite and took shoes off when entering the house. The work was carried out safety, efficiently and the roof looked like new after all the moss had been removed revealing I did actually have a roof under that moss!

I have to say my experience of MHK exceeded my expectations. Right from the first contact they were very professional and no nonsense in their approach. Mark explained the process they use over the phone then came out to give a price.

I felt the price was very fair and there was no pressure at all , just a very courteous and professional approach.

When they were on site the team were friendly and worked very effectively leaving no mess at all.

I would have no hesitation is recommending them and could not fault the service they provided.